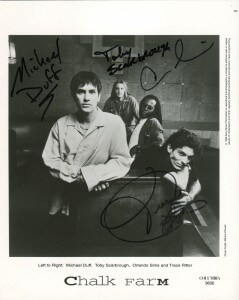 The Los Angeles-based alternative rock quartet was originally formed as a trio in 1994 by Michael Duff (vocals, guitar), Orlando Sims (vocals, bass) and Toby Scarbrough (drums). However, they weren’t content with the group’s acoustic-only sound and in early 1995 added Trace Ritter (guitar) to give the band more power.  Columbia Records signed the act in December 1995.  A year later they released “Notwithstanding,” an album of accessible guitar rock that drew comparisons to the acoustic pop of Toad the Wet Sprocket.  After a couple years of successful tours, Billboard magazine-charting singles, MTV airplay and despite critical acclaim, the indifference the band was met with at their own label forced them to leave in 1998.  They released a follow-up on Duff’s own TIC Records called “Three 2s” with a second drummer, Rob Ahlers in 1999 to help satisfy their cult-like following.  The band finally called it quits in 2000.

Duff eventually began a solo career which garnered an LA Music Awards honor for best AC Male Vocalist and placements on TV as well as becoming a producer in his own right.  Sims is a much sought-after sideman and studio bassist for the likes of Chris Pierce and Debby Holiday.  Scarbrough moved to NY and became an in-demand session and live drummer.  And Ritter toured and recorded with many national acts, placed his music on TV as well as set up Ritter Music Company where he has produces and composes music for artists.

In late 2010, a call from Ritter to Duff began discussions culminating in the re-creation of Chalk FarM, with all four original members.  The re-formed band also connected back with “Notwithstanding” producer Matt Hyde who is currently lending production, mixing and mastering chops to the team.  An updated version of the Chalk FarM sound is being created which fans are calling “seamless” and “powerful.”

They released “Into The Night”, a collection of new music – the first in 12 years and is available on iTunes. The 8-song collection can be purchased in CD form as well but only at shows!

New music is being written and recorded with shows, local and distant being planned.

Go over to the Music page to listen and buy new Chalk FarM music!