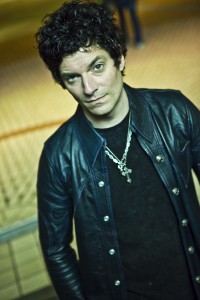 He worked at Sound City Studios from 1989-1991. At the end of 1992 he began working for legendary Producer Keith Olsen at his privately owned studio called Goodnight L.A. Keith has produced some of the greatest records of all time: Fleetwood Mac, Santana, Rick Springfield, Whitesnake, Ozzy Osbourne, and Emerson, Lake & Palmer just to name a few. While working for Keith, Trace wore many different hats. He did some guitar teching for George Lynch, Vivian Campbell and for Emerson, Lake & Palmer both in the studio and live performances. He also worked next to Eddie Money, Lou Gramm (Foreigner), Ozzy Osbourne and the Scorpions.

At the end of ’94 he left and pursued his love for writing and performing music. During this time, Trace was writing songs and playing in bands. He was performing at such clubs as The Roxy, Whisky A Go Go, Troubadour, Café Largo, The Palomino, and Molly Malone’s (just to name a few). Performing with such artists as Tia Carrera, Gene Loves Jezebel’s- Michael Astin and Session guitarist Tim Pierce.

Finally, he met a three-piece band “Chalk FarM” at a club. Singer/Songwriter Michael Duff asked if he knew of any guitarist that might fit the “Chalk FarM” vibe. With that, Trace took the cue to step in. The feel was just right for the foursome. They scored a recording deal with Columbia Records and released ‘Notwithstanding” in 1996. Produced by Matt Hyde (Porn for Pyros, Edna Swap, Perry Farrell, Monster Magnet, etc.) and mixed by mixing great Tom Lord Alge. They toured with acts such as Dishwalla, Tonic, Better than Ezra, Matchbox 20, Marcy Playground, Days of the New and many more. After touring, the band came back to L.A. and wrote a just over 40 songs for their next record. But, as occasionally happens in this business, there was a huge personnel turnover at the label and eventually, at the band’s request, they were let out of their contract. “We tried to shop the band around, but nothing panned out. So, a while later we disbanded”.

After a hard reality Trace picked himself up and got out on the road and toured with DreamWorks Recording artist “Kina” for a year. Then, came back to L.A. and recorded a record with Candlebox front man Kevin Martin. They played shows with “Kid Rock” “Puddle of Mud” “Rob Zombie” and “STP”. With all the touring and being lead around for everyone else’s goals and career choices, Trace was missing the creative side of music… Writing and recording!

In 2004 he built “Ritter Music Company”. A great place to start creative juices flowing he started composing music with other artists as well as music for TV and Film (Coyote Ugly, E-Television, MTV, NBC and Disney’s Camp Rock).

Everything started to come to light: the importance of who you share things with, who you trust and where you want to be. So, he picked up the phone… HELLO Chalk FarM 2011!