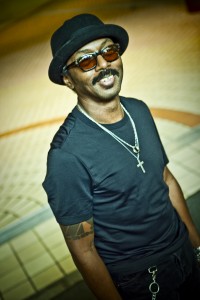 Orlando Sims plays bass and sings in Chalk FarM and was born in the Inland Empire: Riverside, California.

His first guitar named ” Bucket with a hole in it.” Ya!

He says “I got the music bug from, Southern Baptist Church, AM Radio, 33 1/2s and 78 records. I was lucky enough to know my great grandfather, who in my eyes was a great blues player from the real old south (Pre BB king).”

While still learning to playing bass and after breaking his ” Bucket with a hole in it” (which he discovered much later was his grandfather’s very old 50’s Gibson hollow-body guitar) his parents told him he had to play a “real” instrument. So they bought him a clarinet which he played with great displeasure through Junior High school.

From there the game was over. “I went from neighborhood bands, to school local bands playing concerts all over town.” says Orlando. “Up till I was 18 then I enlisted in the Air force to see the World and saw Texas and Montana! For the next 4 years I keep my chops up by playing with friends I was stationed with.”

Once out off Air force. He went back home and started playing in the local cover and original bands for few years. Bands named Rampage, Ice, Stranger. Taboo Zoo & Money!

Orlando moved out to LA (thanks to Mark Danzeisen) and just started playing and touring with anyone who would take him from Jermain Steward, Darling Cruel, Debby Holiday, Ali Handel to The Cult’s Ian Asbury, opening and sharing the stage with artists as diverse as Tom Petty, Smashing Pumpkins,The Damned, Soundgarden, Joe Walsh to the Chili Peppers and Billy Ocean.

After a decade-long battle with cancer, Orlando passed away on Feb 21st 2014.